Endangered Species of Bats in Virginia 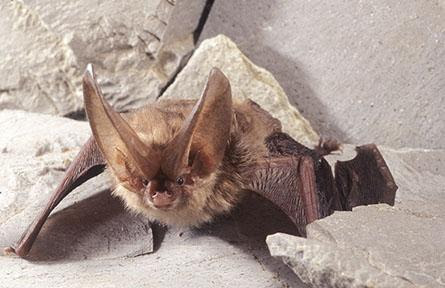 Every October when Halloween comes around, frightening images of werewolves howling at the moon, black cats creeping through the night, ghosts haunting deserted corridors, and bats morphing into blood-sucking vampires often come to mind.

But even when it’s not Halloween, a great number of people still view bats as dangerous, disease-laden varmints that fly beneath the shadows of nightfall, seeking out innocent victims to sink their fangs into.

What a lot of people don’t know is that bats are actually shy, highly intelligent mammals that use a complex language to communicate with one another, are meticulous groomers, dedicated mothers who commonly raise their young in maternity roosts with other females, have the ability to purr, like a cat, when content, exhibit excellent memory and learning capabilities, have keen eyesight, often live well into their twenties and thirties, and some species are even monogamous.

Bats are also extremely beneficial for our environment. Depending on their diet, some species serve as a natural pest control, consuming hundreds, even thousands, of insects such as moths and mosquitoes, per hour. Others are pollinators, much like bumblebees and hummingbirds, while fruit-eating bats distribute seeds through the release of their excrement, often repopulating various types of trees and plants in regions that may have been previously destroyed by fire or deforestation.

Without the presence of bats, many farmers would have to increase the use of harmful insecticides to protect their crops, and there would be a higher risk for potential outbreaks of disease-harboring insects if bats were no longer able to control their populations.

In the state of Virginia, there are three endangered species of bats: the gray bat, Indiana bat, and Virginia big-eared bat. Over the years, millions of bats have been killed as a result of human fear. One of the main contributing factors in North America has been the long-standing belief that the majority of bats carry rabies. While bats, just like any other mammal, can acquire the virus, according to the Virginia Department of Game and Inland Fisheries, less than half of 1% of bats actually contract rabies.

Habitat loss, cave disturbances, and the heavy use of pesticides have also posed a great threat to bats. Some species, like the Indiana bat, roost under the bark of trees during the summer, while the Virginia big-eared bat primarily feeds on moths in forested areas. When trees are cut down for housing and development, these bats have limited places to roost and can suffer from a lack of food source.

During the winter, many bats hibernate in caves and abandoned mines, but some species, like the gray bat, roost in caves year-round. In the past, a number of caves were set on fire in an attempt to destroy large colonies of bats. Today, human caving, vandalism, and tourism still present a danger to bats roosting in caves.

Frequent disturbances can cause hibernating bats to wake more often, resulting in the loss of stored up fat which can ultimately lead to starvation. In maternity roosts, recurrent human activity can cause mothers to abandon their pups, and since most bats only have one pup per year, this can be a devastating blow to an endangered species.

Another peril that bats are facing is a newly introduced fungus called white-nose syndrome. It was transported from Eurasia to the United States by humans and has already killed millions of bats since 2006. White-nose syndrome is a fungal disease that forms on the wings and faces of hibernating bats and causes them to awaken too frequently. This disruption drives many bats out of their caves in an attempt to find food during the middle of winter, resulting in high mortality rates from hypothermia and starvation.

There is currently no cure for white-nose syndrome; however, scientists are still working on developing a successful treatment to stop or slow down the progression of the disease, and have found, more recently, that some species of bats are starting to show signs of immunity.

Many scientists like Dr. Merlin Tuttle, founder of Bat Conservation International, have spent most of their careers educating the public regarding the importance of bats. In his book, The Secret Lives of Bats: My Adventures with the World’s Most Misunderstood Mammals, Dr. Tuttle states, “As I learned more about bats and their critical roles, I couldn’t resist speaking out on their behalf.” While bats still face a great number of threats, there are various conservation efforts being made to protect them.

To prevent cave disturbances, scientists have installed slatted, steel gates at the entrances of many abandoned mines and caves used for roosting, enabling bats to come and go as they normally would, while keeping inquisitive explorers or potential vandals from entering.

Fortunately, there are many things people can do to help protect bats. Setting up bat houses in backyards, planting wildlife gardens that attract nocturnal insects, eliminating the use of toxic pesticides, and educating others about the benefits of bats to our environment can all contribute to the preservation of bats and their various habitats. As Dr. Tuttle affirms, “…bats are such powerful contributors to human well-being that converting people to like them can be amazingly simple.”

Brooke Shipe lives in Northern Virginia with her husband and two kittens. She is an aspiring author and is currently working on a young adult fiction novel. She has a passion for wildlife and hopes to contribute to a variety of conservation efforts.