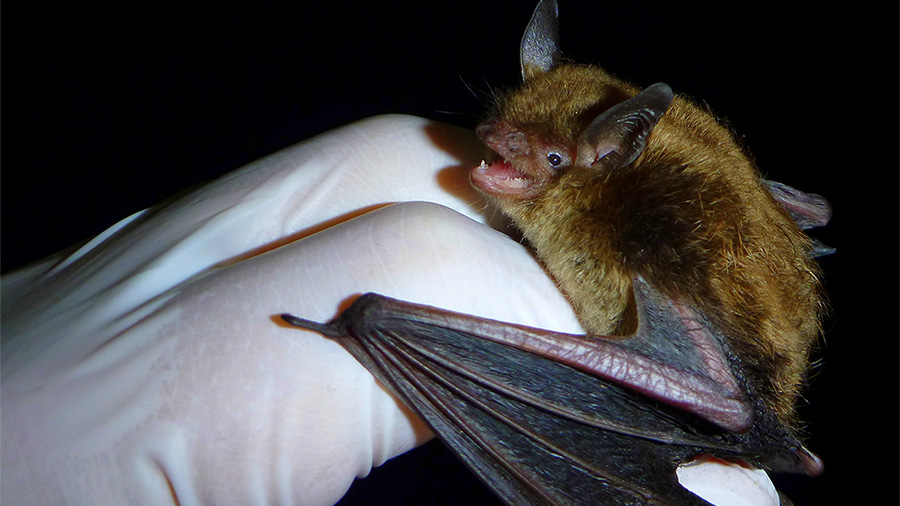 In Virginia, we are lucky to host 16 species of bats. Unfortunately, about half are either state or federally listed as threatened or endangered. One of those, the little brown bat (Myotis lucifugous), also referred to as the little brown myotis, was once the most abundant bat in the commonwealth. Today it is listed as state endangered and is under review for federal listing.

These tiny bats weigh 7—9 grams and are only two inches from nose to tail. They range from a grayish brown to a dark mahogany on the back with lighter bellies. Little brown bats, as with all North American bats, are nocturnal and consume night flying insects. In fact, bats consume vast numbers of night flying insects and are an essential part of our ecosystem.

With only two exceptions,bats in the US and Canada are insectivores. They use echolocation to locate small erratic insects in the dark. Bats can see perfectly well, but need an extra sense to help them secure small, erratically flying insects in the night sky. They use a biosonar called echolocation, where they ‘shout’ out an ultrasonic call. The echoes of their calls come back to their ears, and using those echoes, they can tell how large an object is, how far away it is, and which direction it’s moving. Echolocation a very complex skill and one of the most sophisticated uses of sound known to science.

Because native bats shout through their mouths for echolocation and their prey is small insects, bats use their entire body to secure prey. They will swat insects into their tail membrane and then reach down with their heads to retrieve the prey. Young bats need to learn to match flight to echolocation calls and learn to manipulate insects with their wings and tails–they have a very steep learning curve!

About half of Virginia’s bat species hibernate in caves. Historically, cave dependent bats like little browns hibernated in huge clusters in suitable caves. But tragedy struck Virginia in 2008, when a fast-moving introduced fungus arrived in the bat caves. The fungus, Pseudogymnoascus destructans, causes white-nose syndrome, a condition that has decimated cave bat populations in the US and Canada. In Virginia, we have lost over 90% of our little brown bats just over 10 years. Native populations of Northern long eared bats and tricolored bats have been decimated as well. White nose syndrome is thought to be the fastest moving and most destructive wildlife disease in recorded North American history.

While bats are a rabies vector species and should never be handled with bare skin or allowed to have contact with children and pets, they are under such threat that we can no longer allow exaggerated fears to rule bat management. Fairfax and Arlington Counties have very bat friendly policies and only test bats for rabies if there has been a risk of exposure by way of a bite or saliva contact. You can protect yourself against rabies by avoiding any wild mammal or unfamiliar cats and dogs. If you need to move or contain a bat, please contact a wildlife expert for advice.

If bats have taken up residence in your house, there are seasonal considerations so that they are not evicted when young are present. If mothers are sealed out when young bats are inside, they will desperately try to get to their babies. They will come in through any opening they can find, and the young will slowly starve because their mothers can’t get to them, which is needlessly cruel and unsanitary. Bat roosting on the exterior of the house or using shutters and end louvers are not a threat. Bats can be humanely excluded in September, when the young are old enough to fly and follow their mothers to alternate roosts.

If you are lucky enough to spot a little brown, or any bat, chasing insects in the late afternoon or at dusk, take a moment to enjoy one of nature’s marvels in action!