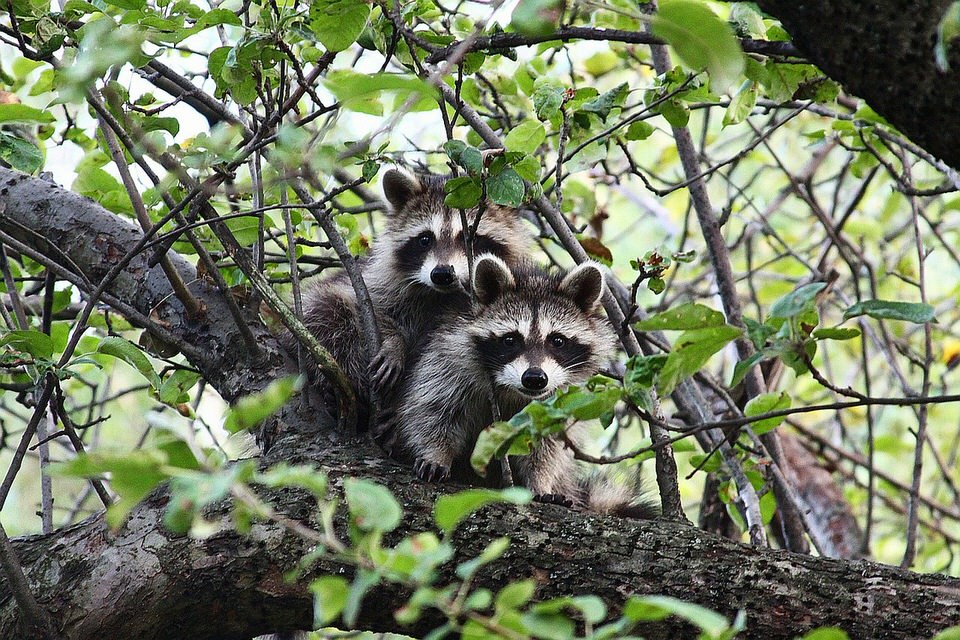 The raccoon (Procyon lotor) belongs to the carnivores grouping, a group that is composed of mammals which are primarily meat eaters, although many of them also eat berries, fruit, vegetables, eggs, acorns, beech and hickory nuts, grains, grasses, and bark, if nothing else is available. All carnivores have five toes and large canine teeth. The raccoon is omnivorous and the ratio of plant to animal food varies by season and what is available.

Raccoons are in the Procyonidae (procyon, meaning to wash) family which also includes the ringtail cat and coati, and probably the red panda. There are seven species of raccoons in North America and 25 subspecies. Their weight varies from 12 to 35 pounds. Females are usually smaller than males. Their color is grayish-brown, and the tail has 5 to 7 complete dark rings, alternating with broader brown or gray rings. The tip of the tail is always dark. Albinistic (white) and Melanistic (black) individuals are not uncommon.

Raccoons have a highly developed sense of touch considered to be superior to other non-primate mammals. They can easily unlock doors and get into trash cans and other mischief. They have a keen sense of hearing and visual acuity consistent with their nocturnal habits. Raccoons are excellent climbers and are one of the few mammals that can descend vertical tree trunks headfirst. They are also strong swimmers and can easily cross rivers and lakes, but only venture into deep water as an escape route from trouble.

It is commonly believed that raccoons wash their food. Evidence indicates that only those in captivity wash their food and that the washing is a fixed-motor pattern used in searching for aquatic prey in the wild. The name raccoon is derived from the Algonquin Indians and translates to “he scratches with his hands”.

Raccoons are mostly nocturnal. Another myth about them says if they are seen out in the daytime, they must be rabid. It is quite common, especially in urban areas, for a healthy animal to venture out during the day if it is hungry or its den has been destroyed. Frequently, mother raccoons that are nursing kits will be forced to search for food night and day. If an animal is behaving normally in the daytime, it is probably not rabid and should be left alone.

Raccoons are not territorial. Preferred terrain is forested, with ponds, lakes, marshes or streams. Raccoons are not found in terrain that lacks evergreen forests and water. When you release raccoons, it is imperative to find a place where there is plenty of water, no hunting, and people willing to feed the raccoons until they can find their own food.

Raccoons usually den in hollow trees, rock crevices, and ground dens. In late fall and early winter, their fur will thicken into a heavy winter coat and they will eat as much as they can find as during harsh weather. In winter, raccoons will spend weeks in their dens without eating. Contrary to belief, raccoons do not hibernate.

Adult raccoons breed between January and June, depending on environment and environmental conditions. The first breeding cycle is at about ten months of age. While males are physically able to breed in the first year, they usually do not because of competition with older males. If the female does not become pregnant during the first estrus, she can come into estrus again four months later. This is where the late babies come in. Most babies are born in April and May; the gestation period is about 63 days. Male raccoons have no role during gestation or cub-rearing. Litters are anywhere from one to seven; four is the usual size. Cubs are born very lightly furred, with a faint mask. Pigmented tail rings will either be present or will appear at about one week of age. Ears are pressed tightly to the head, and the eyes are closed. The head seems large in comparison to the rest of the body. They typically weigh three to five ounces.

When hungry, cold, or not in contact with another warm body, the cubs will start chattering, whine or twitter like birds. They can crawl in a spider-like fashion with all four legs in extension, but cannot climb or stand and support their full weight. The eyes open at about 21 days, the ears shortly thereafter. They will be very vocal at this age. They will churr, growl, hiss, and give an alarm snort. When five to six weeks old, most can walk, run, and climb very well. Seven-week-old cubs will engage in active (and sometimes rough) fighting characterized by growling, squealing, biting, wrestling, and imitating adult defense postures. After about eight to nine weeks of age they begin eating solid foods in the wild and begin traveling with their mother.

When four months old, they will be completely weaned. Raccoon mothers with cubs enjoy a privileged position in the raccoon hierarchy. Other raccoons will defer to a female with cubs in feeding situations. This privileged status lasts as long as the cubs remain with the mother. In northern areas (this applies to Virginia), cubs will stay with the mother close to a year until she is ready to breed again. In southern areas, cubs may go off on their own in the fall, but after dispersal will often reunite as a family from time to time in denning and feeding situations.

Raccoons can live up to 16 years in the wild but most die before reaching five years. Studies show that the greatest mortality occurs during the second year of life. Principal causes of mortality are activities of man – mainly hunting, trapping, automobiles, and dogs. Other causes can be malnutrition and disease. Natural predators are cougars, bobcats, wolves, coyotes, alligators, foxes, and great horned owls. The number of deaths caused by natural predators is insignificant compared to the number of deaths caused by man.

Raccoons are very clean and use a common latrine in the wild.

Raccoons are one of the few native mammals that have not been restricted to increasingly smaller areas of natural habitat by urban development. The raccoon has adapted to man’s environment. Attics and chimneys become dens and rest sites, storm sewers become subways and pet food left outdoors replaces the traditional dietary staples. This urbanization has created the potential for frequent encounters between humans and raccoons. Some of these may be problematic.

The most common complaints occur when raccoons den in chimneys or attics. This is particularly difficult if the den is occupied by a female with cubs. It is best to leave the family alone until the mother moves the cubs, which usually occurs when the cubs are about eight or nine weeks old. I know of cases where pest control companies were called to remove raccoons, and they trapped the mother raccoon and released her far away from the removal site. They then sealed the chimney or attic, leaving babies inside to suffocate or starve.

Sometimes the homeowner will hear the babies crying and will call a wildlife rehabilitator to come and get them. I would like to stress that most babies received by rehabbers have not been orphaned — they are kidnap victims! If you get a call from someone who has a raccoon in a chimney or attic, and has not called a pest control company, assure them that the mother will move the babies to another site when they are eight to nine weeks of age. Try to persuade them to leave the animals alone until the cubs have been moved. If that fact is stressed enough, it usually works.

Another sad story about raccoons is that they often get killed when hollow trees are cut down by chain saws. If you see somebody cutting a hollow tree, please stop and tell them to check for inhabitants first.

Raccoons can contract both feline and canine distemper, rabies, leptospirosis, salmonellosis, tuberculosos, coccidiosis, and toxoplasmosis. Parasites are: roundworm (Baylisascaris), tapeworm, flukes, and heartworms. Canine distemper is a viral disease, spread by direct or indirect contact. It kills more raccoons than any other disease. It has wiped out complete raccoon populations in some areas.

Canine distemper cannot be transmitted to humans. All warmblooded animals can transmit rabies, however raccoons, foxes, skunks, woodchucks, and bats are considered high-risk species. Canine distemper symptoms in raccoons closely resemble rabies symptoms. Both are related to the nervous system and may include paralysis, self-mutilation, circling, and lack of fear of humans.

Rabies is spread to humans through bites or saliva from infected animals. There are two types of clinical rabies in animals: “dumb” and “furious.” In the “dumb” form of rabies, the animal is lethargic, often exhibiting a staring expression, and can look sick. In the “furious” form of rabies, aggression is the most notable sign. Affected animals can attack non-prey species. Paralysis and convulsions can be seen in the later stages of both kinds.

Although the raccoon is considered the primary rabies carrier in the midAtlantic, a raccoon has never in medical history been implicated in a human case. Care should be taken when a raccoon looks sick or acts strangely, but overreaction against all raccoons is unwarranted. Never attempt to catch a raccoon; it may bite in self defense, which will guarantee its death for rabies testing.