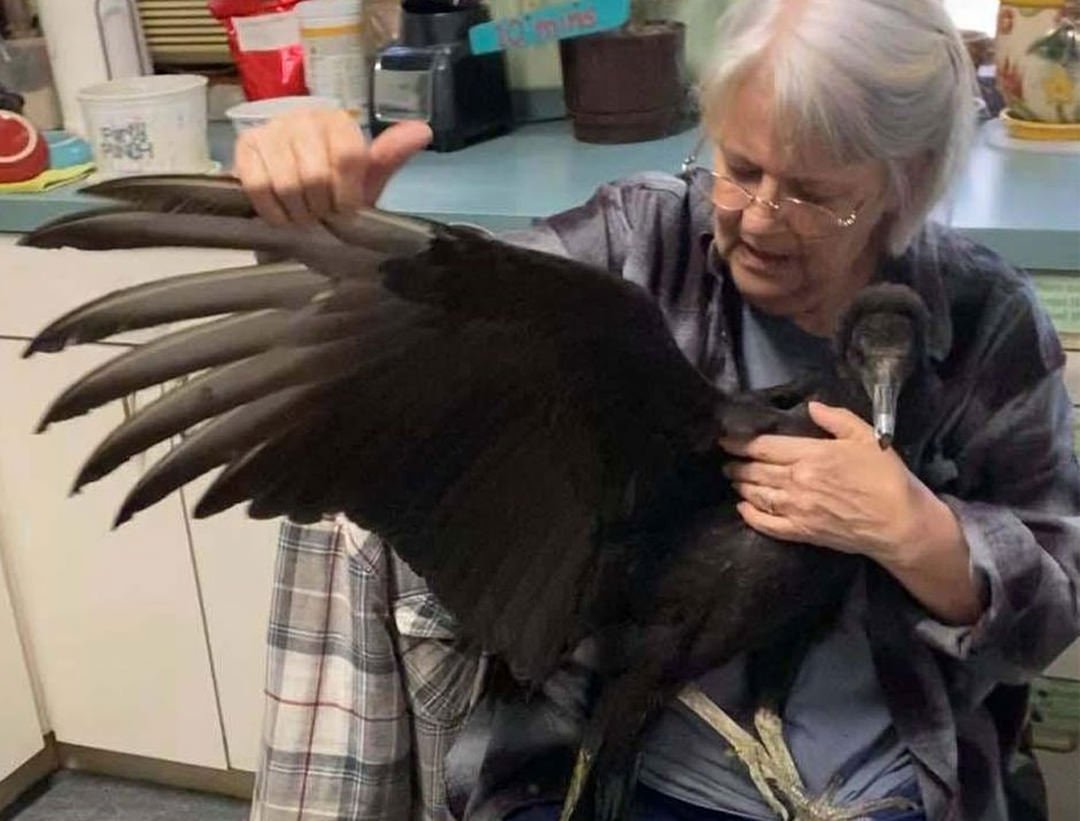 Virginia relies on a volunteer corps of licensed Department of Wildlife Resources (VDWR) rehabilitators, apprentices, and care providers. This group of several hundred wildlife “rehabbers” take in, care for and release wildlife throughout the state. In Northern Virginia and surrounding counties, WRL works with about 28-32 rehabilitators and 18 – 20 apprentices annually. Over a series of Nutley News articles, we will introduce you to many of those that work directly with WRL, as advisors on our helpline or as care providers for wildlife.

Madeline (Mattie) Libre is a NoVa rehabilitator who lives on five acres in Manassas. When you turn into her driveway, you’ll pass the VULTURE CROSSING sign and pull up near her outdoor cages filled with a variety of birds. It might take a few minutes of looking around before you spot the vultures (sometime up to 100!!) that are just hanging out around the yard and in the trees. In addition to vultures, Mattie takes in and loves opossums. Why vultures and opossums? In her words, because black vultures are clowns, turkey vultures are majestic and opossums are just so darn cute and different! When she’s not caring for wildlife, she designs greeting, wedding and holiday cards for friends and family.

Her story begins in 1987, when she found two baby opossums. She got help from Jackie Freitag and also from Dr. Porter who worked with Ed Clark at Wildlife Center of Virginia. From there, Mattie went on to rehabilitate turtles, squirrels, songbirds, bunnies, vultures and pigeons. She would stop supporting one species as new rehabilitators stepped up to take them in for rehab. After about 15 years, she looked around and realized she was now the go-to rehabber for the “misfits” – those species that were not cared for by local rehabilitators –vultures, seagulls, opossums and non-invasive pigeons.

Mattie’s favorite story can be found in her book titled “Who’s Untying My Shoelaces?”. When she released one of her previously injured vultures named “Clem” (yes, most rehabilitators name their patients!), he hung around her property for a long period of time. Then, for a period of years (vultures can live to be up to 50 years old), Clem would come visit her on Easter Sunday to say hello. He just comes for a visit, hangs with the other vultures and, if Mattie is nearby, he unties her shoelaces. For the record, Easter is always on the first Sunday following the full moon that occurs on or just after the spring equinox. Vultures are smart, but are they that smart? Guess so!

Her advice for a new rehabilitator apprentice: “if you’re not dedicated and you don’t have your spouse’s support, don’t do it.” Mattie’s husband, Ray, is very supportive of her rehab efforts, as well as her stepdaughter, Renee Small. Mattie has shared her advice and rehab wisdom by sponsoring several of our partner rehabbers (Heather Munsterman, Karen Pratzner, Olivia LoBalbo and Laura Schultz) as well as her current apprentice, Helen Stidman.

What’s the one animal that she hasn’t cared for but would love to? A bear, any bear!!! Mattie would love to feed a baby cub because they are just so cuddly!