The Bobcat — Master of the Art of Concealment 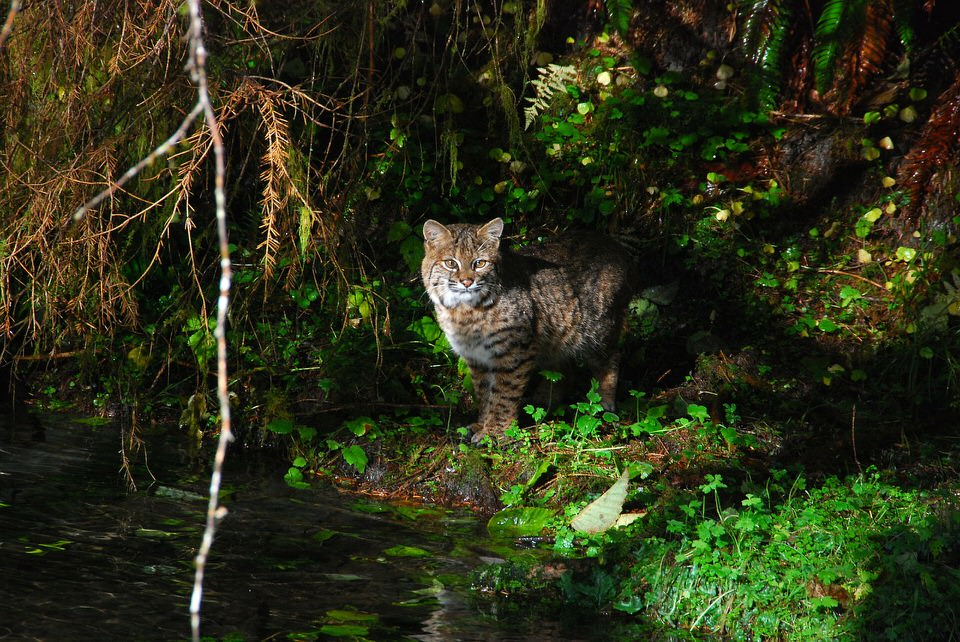 The Bobcat — Master of the Art of Concealment

One morning last January, I got a call from a very excited woman in Great Falls, Virginia, wanting information about bobcats. She wondered if it was possible that bobcats lived in the woods behind her house along the Potomac River.

For years, she had been hearing loud and eerie sounds at night, like the noises domestic cats make but much louder. There were growls, coughs, hissing, meows, spitting and snarling, and occasionally, loud purring. The caller explained that during the past few nights, the noises got so loud and frightening that she wanted to find out what type of animal was making them. Knowing that bobcats had been spotted in her area and with my curiosity peaked, I asked the caller for directions to her house so that I could get there quickly when she heard the noises again. By the time I reached her property, the commotion had stopped.

One very cold and nasty night the woman phoned again. I was tempted to ignore it, but curiosity got the better of me and I rushed to the scene of the noise. This time was a success; the loud noises were still going on when I got there about an hour later. I stayed in the car and turned on my tape recorder; I wanted to check with a biologist who has worked with bobcats to confirm that these were really bobcat sounds. The recording was clear enough and the biologist confirmed that these were indeed the sounds of bobcats mating.

Bobcats (Lynx rufus) are very solitary animals during the winter months, but in early January or February, adult male bobcats begin searching for females. Females outnumber males because males travel farther and are often killed by trappers. Male bobcats usually mate with more than one female. Fighting between competing males is common during the breeding season, resulting in loud and violent noises. The fights are furious and fur flies.

During mating, the male bites the female’s neck, and because the female may change her mind, the male ends up with split ears. The noises continue until mating is completed. Males will seek out other females, but the females will not tolerate the males once the infants are born. Most breeding occurs in January or February and goes on into early April. However, pregnant females can be seen in every month of the year. Some females raise two litters a year. (Bobcats in captivity can sometimes have three litters in one year.)

Pregnant females require dens that offer maximum protection. Rocky caves are preferred, but hollow trees, hollow logs or earth dens that have been abandoned by other animals are also used. Bobcats do little digging, but a den can be easily identified by the strong odor of the urine that is always sprayed at the den’s entrance.

The gestation period for bobcats is 62 or 63 days. An average litter consists of three kittens. Babies are 8 inches long and weigh about 8 or 9 ounces. They have a grayish-brown base coat of fur with many dark spots. The babies’ eyes are sealed shut and when they open after 9 to 10 days, the eyes are blue. Over the next two months, their eyes will gradually turn yellow. Kittens crawl well at 3 to 4 weeks of age, and the mother will start to feed them their first slivers of meat around that time. After the second month, the kittens begin to come out of the den and around 8 weeks of age the mother will begin to wean her young.

Bobcats are able to survive in diverse terrains—mountain areas, swamps, deserts, along farm boundaries, and even outskirts of cities. They can thrive as long as food is available and they are adequately protected and concealed. Bobcats do not migrate, although under extreme conditions they may be forced to shift their range temporarily. They do have, and hold on to, their territories. Females with kittens do most of their hunting within one mile of their dens, even though their territories can be as large as six square miles. The adult male territory is often 10 times as large, often overlapping those of several males and as many as 6 to 10 females. If food is plentiful, bobcats travel just far enough to make a kill. Because bobcats get most of their food by stalking or ambush, they usually do not have to travel very far.

Bobcats eat about two pounds of food per day, and they prefer freshly killed meat. Their main diet consists of cottontail rabbits, jackrabbits, mice and rats. They also eat squirrels, chipmunks, skunks, beavers, muskrats, grouse, wild turkeys and other ground nesting forest birds and their eggs. Bobcats also kill deer, especially in winter when a deer is weak and close to starvation or when wounded or killed by hunters. When available, bobcats will also kill livestock, poultry, small pigs, lambs and sheep, as well as feral and domestic cats. (Although bobcats will kill housecats, there are records of hybrid species.) If large prey is killed, the leftover food is covered with grass, dirt or sticks, and the bobcat returns to the carcass before it begins to spoil. Carrion is only eaten if the bobcat is starving.

Bobcats usually walk from place to place when hunting. When running after game or trying to escape enemies, they bound along. Bobcats can run a short distance as fast as 25- 30 miles per hour. They do not have an aversion to water that is common with domestic cats. Bobcats have been observed playing in water and catching fish. Their sense of smell is extremely important in their communication. Males and females urinate on rocks, tree stumps and grass to proclaim their presence and to claim their territories. Areas with large forests, such as Great Falls and along the Potomac River, are good habitats for bobcats.

Since they are extremely furtive, bobcats are quite confused with the lynx (Lynx Canadensis), so it is important to know how to tell them apart. The bobcat gets its name from its bobbed tail. The tip of the tail is always white with a black bar; the lynx’s tail is all black. Both species are referred to as “wildcats.” The bobcat is only found in North America, where it is the most common wildcat. Bobcats are smaller than lynx and weigh between 18-22 pounds. The average lynx weighs 22- 30 pounds and is not usually found in Virginia or Maryland.

With few natural enemies, bobcats in urban areas can fall victim to humans or dogs. In other areas of the country, their enemies are trappers, mountain lions, wolves and coyotes. Their natural defense includes speedy escapes and tree climbing. Bobcats may be inflicted with lice, fleas, roundworm, tapeworm and often mange mites. They live an average of 10 to 12 years, although bobcats in captivity have lived as long as 15 years.

Bobcats avoid human contact, but if you can share your land, they will make good neighbors and help keep the rodent population down.