The Coyote, the Western Wanderer 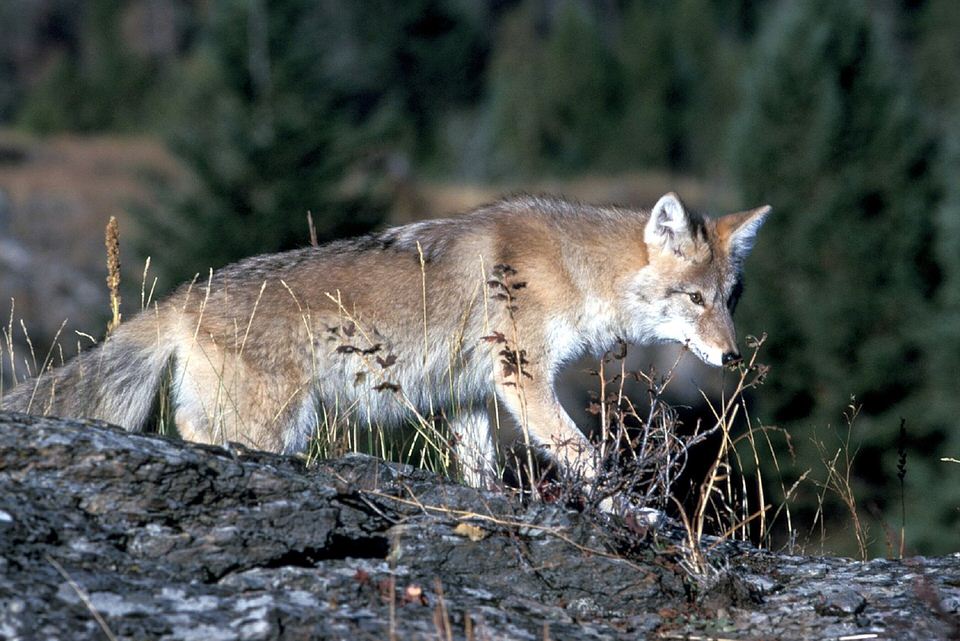 The Coyote, the Western Wanderer

Coyote’s incredible journeys carry it toward the city!

Coyote sightings along the Eastern shore!

These and many other headlines have appeared in various newspapers along the East Coast recently.

I have had several coyote calls from the public over the years, and they have increased the past year. People call and say, “I thought these animals only lived out West.” I tell them, “Not anymore!”

The first and probably the strangest and funniest was about 10 years ago when a call came in early in the morning about a coyote sighting in a park behind George Washington High School, about 10 minutes away from my house. A neighbor was walking his dog and saw the creature in the woods. My husband Richard and I rushed to the area not believing that it was a coyote, but expecting almost anything. As we got close to the area we heard a sound that sounded something like “maw” — there was the coyote in goat’s clothing! The poor animal was in great distress as her udder was full of milk. She was tied to a tree and a large garbage bag filled with donuts was next to her. I quickly milked her and we called the Alexandria Animal Shelter for help. It turned out that it was a high school prank and students had kidnapped the animal the night before from the Brownie Academy in Alexandria.

Recently I got a call from the Springfield area about a coyote. After I asked a lot of questions and the woman insisted it was a coyote, I decided to go there and check. It turned out to be a neighbor’s German shepherd that was collected by his owner before I got there. Although these are the usual or unusual calls about coyotes, I fully expect that one day a call will come in about an actual coyote sighting. We have to be prepared for it, and understand the animal.

Coyotes, foxes, dogs, wolves, jackals and dingoes belong to the Canidae family. They are among the most intelligent of all mammals. The coyote’s scientific name is Canis latrans. Canis means “dog” while latrans means “barking”, and the coyote does a lot of vocalizing. Once a western plains wanderer, they have adapted to almost any landscape made by humans, from farms to city fringes, and they have spread virtually from coast to coast. Virginia has been a last frontier for these greyhound-sized canines.

They appeared about 15 years ago from Southwestern Virginia and Pennsylvania. Currently, most are reported in the mountainous areas west of Washington, or in southwest Virginia. However, there have been sightings in most areas of Virginia. Coyotes do not migrate, but when the young leave the natal area, they seek new territory. During that process some coyotes have traveled as much as 100 miles. However, if food is plentiful, coyotes seldom travel more than five miles a day.

Coyotes scratch out an existence because of extreme flexibility. Their success is probably due to human actions, including widespread forest clearing that promotes an abundance of small mammals, and eradication of wolves from the Eastern United States. If we would stop encroaching into their territory, they would stop coming into the suburbs, and on occasion into towns.

The coyote has five toes on each of its forefeet and four toes on each of the hind feet. Only four toes show up in the tracks because the fifth toe on the forefoot is high on the inside of the foot and does not register in the tracks. The coyote’s foot is much narrower than that of a dog of the same size with two outside toes slightly behind the center toes. This is important to know when checking tracks to determine if it is really a coyote or (more likely) a dog.

The coyote does not chew its food. Small prey or other food is swallowed whole; larger prey is cut into small pieces. The 42 carnivore teeth are designed for meat eating, but coyotes will eat almost anything. Most of the diet consists of cottontail rabbits, jackrabbits, mice and rats, berries and fruit if available. Deer are the coyote’s most important prey; they will kill more deer than any other wild predator. In western regions, prey includes pronghorn and antelopes. Some coyotes kill adult sheep, but lambs are most vulnerable. During winter months when snow prevents hunting of mice and rats, carrion is the main diet.

Coyotes have large yellow eyes with round black pupils, indicating a diurnal animal. Although most of the activity is during the night due to the presence and harassment of man, sightings during the day are not unusual. If coyotes are not harassed, they will be active in early morning and late afternoon, and howling and singing can be heard in the evening. When the coyote is under some pressure, howling is only heard after darkness sets in and they are seldom seen. However, if animals are under harassment, they will not howl and only tracks will indicate that they are around.

Coyotes trot like dogs, but when surprised or scared will gallop with body flat and ears laid back and can reach a speed of 35 miles per hour or more. Coyotes can always outrun dogs.

The coyote follows a social order and exists within a strict social hierarchy within the family group. Each member knows its place in the family. When a strange coyote arrives, usually bluffing and sometimes fighting quickly establish dominance.

Coyotes are monogamous and mate for life. During breeding season, late February or March, the female picks a mate. Copulation usually occurs several times and after completion, preparation is made for construction of a birthing den. Unless disturbed, older pairs will use the same birthing den year after year. The pups are born after a 63-day gestation period, and are blind and helpless. Litters consist of five to seven pups. Until the pup’s eyes open 10-12 days after birth, the female does not leave the den and the male will hunt and bring food to her. Coyote pups will become active when three to four weeks old and will start engaging in active play fighting. When eight to nine weeks old, pups will begin to travel with their parents and learn how to hunt. After a short time, they have learned the skill to kill mice, insects and frogs. At this time, the weaning process will begin and the birthing den will be abandoned. By the time the pups are six months old they look like miniature adults, only with a much lighter coat. Some pups may leave the family at this point, but most will stay with their parents until spring.

The coyote’s life span is between 12- 15 years, but most die during the first few weeks of life and many die or are killed before they are a year old.

Humans kill most coyotes using various methods such as hunting, trapping, aerial gunning and poisons. Dogs may kill coyotes if they can catch them. In some areas mountain lions, eagles and bears kill pups, but seldom get an opportunity to kill an adult. Coyotes also die from distemper, heartworm, rabies and mange.

To Indian tribes the coyote has always been a friend, treated with respect. Although the Indians raised sheep and goats, they had few losses from coyotes because of the way they cared for their flocks. Trouble began when white ranchers invaded the territory and established large sheep ranches, and coyotes started to kill lambs, the rancher’s livelihood.

Over the years many methods have been employed to keep coyotes away from livestock. Attempts to reduce the western coyote population with a wide variety of lethal and inhumane methods have proven only that the coyote is more resourceful, smarter and more adaptable than we are. The establishment of bounties began over 100 years ago and has been widely recognized as a waste of money and effort. Sheep producers are better served by establishing a program that makes information available on managing livestock to reduce predation. Many predation-reduction techniques have been used with great success. Livestock-guarding dogs have been very effective. Some farmers have enlisted the aid of donkeys, which are known to scare off coyotes. Electric fences, strobe lights and alarm systems also work well and should be installed around areas that are in coyote territory.

People view the coyote in a variety of lights. To some hunters, the coyote is a challenging quarry, which gives many a thrilling chase. To people who simply enjoy and love nature, the coyote ranks as one of the most beautiful, intelligent creatures on earth. To many cattle ranchers, it is the symbol of the “Old West” and they enjoy listening to the yipping song of coyotes at sunrise and sunset, while others hate it as a despised varmint. Biologists are grateful to have coyotes around to keep the ever-increasing deer population under control naturally.

The coyote is a very resilient animal and will always be around. To paraphrase William Faulkner, the coyote has not just survived, it has prevailed. The Western Wanderer is here to stay!