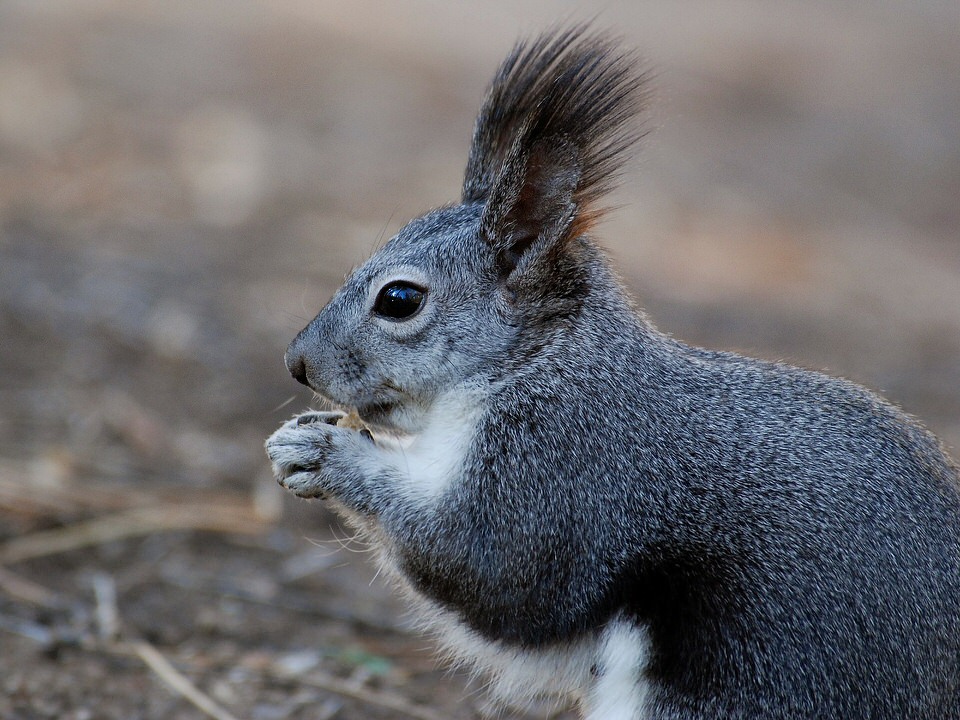 The Eastern Gray Squirrel: Furry-tailed Daredevil… or Devil With a Furry Tail?

Squirrels. You either love them or hate them. There’s not much neutrality on the subject. They seem to be the sworn enemy of gardeners, the scourge of birdfeeders, and (according to a recent USA Today article) the main reason so many pest control companies stay in business. Many types of “squirrel proof” feeders are sold, many of which do not work in the long run or are actually dangerous to squirrels. Humane traps do a booming business.

On the opposite end of the spectrum are those who accept and even admire squirrels as back yard entertainers, athletes, and the species that still manages to be successful after development has destroyed most of the wildlife habitat.

Being natural athletes, assisted by their multi-purpose tails acting as rudder and parachute, and with prodigious climbing ability, they have a habit of getting into places humans would prefer they not. Like bird feeders, attics, and chimneys.

People who love squirrels do so in spite of their mischief – or perhaps because of it. They are not overly intimidated by humans and will share their territory with us, doing their remarkable feats of acrobatics during the day when they can be admired. Add to their entertainment value the appealing appearance (wide set eyes, bushy tail) and they can be real charmers.

The Battle for Territory – A War with No Winners

Although squirrels are willing, even forced, to share their territory with humans, the reverse isn’t always true. Their success as a species has put them in a constant battle for food, water, and housing, and that battle sometimes encroaches on our domain. They eat at our feeders and nibble our vegetation, make holes in our lawns, nest in our attics (sometimes chewing on electrical wires), fall in our swimming pools while trying to get a drink, and get trapped in our chimneys. They have the audacity to build nests in trees that we want to cut down. The housing crisis even prompted one mother to have her babies between the cushions of a lawn chair!

Many of these squirrels, or their offspring, end up with rehabilitators. Frequently, well-meaning individuals report that they “humanely” trap and relocate squirrels to the park. Squirrels are very territorial and generally have a home range where they know the nesting spots and food sources; introducing them to a strange neighborhood usually ends up with a squirrel being driven out. Even if a mother and babies are trapped and relocated together, the babies frequently end up starving or abandoned because the mother cannot find food. Relocating does the homeowner no good either – new squirrels come in to fill the vacancy, and it becomes a never-ending cycle. Usually it’s illegal to “dump” animals on someone else’s property (private or public) without permission.

When a hotline volunteer gets a call about squirrels in the attic, callers are encouraged to wait it out for 5-6 weeks if there are babies involved, since mother squirrels build more than one nest and will move the babies at about six weeks of age. If for some reason the caller can not or will not wait, we discuss humane methods to get the mother to remove her babies voluntarily (one is placing in the attic a loud battery-operated radio with rock or talk), or recommend a professional who uses those techniques. The worst scenarios occur when the homeowner has already trapped the mother and boarded up the exit, only to discover babies later.

Squirrels can be fun to watch, and provide a valuable service in the reforestation of lands cleared by development. (They tend to scatter the acorns they bury and forget where they put some of them.) But it’s understandable that some of what they do may be unacceptable to homeowners, particularly since they can be destructive to wood fences, decks, and roofing. They do like to chew. Still, most humans tend to be more intelligent (although perhaps not more determined) than squirrels, and can find ways of drawing lines that are humane and subtle, rather than cruel and drastic. And then they can relax and enjoy their antics and enthusiasm for life. Hmmm… maybe we’re really just jealous of how much fun they have.

When do squirrels have their babies?

They have two litters a year, breeding in mid-winter and again summer. This season’s summer babies were devastated by the drought and many mothers were forced to abandon them. Many starved and dehydrated babies were found and brought to rehabilitators.

Why do they chew so much?

Squirrels have rootless teeth that continually grow and need to be filed down. Your fence or deck may be their equivalent of a relationship with a dentist. If you are having trouble with chewing, you can try putting soup bones, antlers, or bones sold for dogs in your yard for them to chew on. One rehabilitator noticed they were constantly licking the mortar between her bricks; she put out a salt lick and they left her mortar alone after that.

Should I feed them?

If you feed them, they will come. Squirrels are opportunistic, and the word gets passed along quickly. How tolerant are your neighbors of squirrels? Also, consider their natural diet, which is primarily vegetarian. Most of what people give them is high fat and not natural, and really isn’t healthy for them.

If you don’t mind a yard full of them, here are a few tips:

Keep the feeding away from the house. Don’t encourage them to eat from your hand. (Squirrel bites hurt and require a good clean-out and current tetanus shot, but are rarely a rabies concern.)

Use a squirrel box with a lid they can lift to keep their food from being taken by large birds like crows and blue jays, rats, or even chipmunks, who will hoard huge quantities.

Do not feed them empty calories such as bread. Peanuts and sunflower seeds are not good for them in any quantity; if you must give these, make them a special treat.

During dry times make sure there is plenty of fresh water available. Add moist food such as cut up apples, watermelon, or fresh corn on the cob for a real treat.

If you start in the fall, continue over the winter and through the spring baby season. The combination of hypothermia and lack of food due to exhaustion of food and fat stores is a major killer of squirrels; if you want to do supplemental feeding, late winter is the most critical time. Try dried corn for a good energy source, and even dry dog food for protein.

Why are there so many dead squirrels in the road in the fall?

Fall is the “great reshuffle”, a time when juvenile and adult males change territories and mix up the gene pool. Because so many are inexperienced around cars, they tend to run right out in the road at the worst possible moment. Squirrels are not particularly adept at defensive roadcrossing, being a poor judge of oncoming speeds and not comprehending this massive thing bearing down on them.

What kind of squirrel is that black squirrel?

Gray squirrels actually come in a wide range of colors, with extremes that range from pure white to pure black. All are the same eastern gray squirrel species (Sciurus carolinensis), with genetic variations that range from pure black to pure white. Although there are true albino squirrels, there are also white squirrels with blue eyes or dark eyes. The white fur makes them more susceptible to predators as they are more easily seen.

A number of rehabilitators have shared their prevention tips:

Place a motion detector which makes a noise, next to the area you are trying to protect. Inexpensive ones are marketed as toys or novelty gifts.

Use a layer of dog hair (from dog groomers) or the contents of your vacuum cleaner bag spread over the surface after planting. Mulch it to look as undisturbed as possible, rather than freshly planted. Pinecones pressed down in the dirt around plants tend to discourage squirrels. Blood meal (fertilizer) is also a deterrent to small mammals, but may actually attract larger carnivores. Garlic power works, but must also be replaced frequently.

Close or cover garbage cans, and if possible make them inaccessible. If you have a barbecue near the house, keep it clean and covered. Squirrels have been known to eat the drippings and sometimes build a nest if they can get inside.

The use of moth balls can work temporarily. A determined squirrel will get used to the smell, or simply push it out of the way. Try wrapping them in a piece of metal screening to form a bag, then tie the bag to a solid object. Replace the contents every few days to maintain effectiveness.

Plant your bulbs as deep as possible within their germination limits. Figure out what they like and don’t like, and use the less desirable plants. Try Bitter Apple spray on the leaves. Or — plant a little extra for the squirrels.

Stay away from products that use hot peppers in them. The theory is that they will keep squirrels away, but in reality if a squirrel is hungry enough it will get into it. The peppers can be transmitted to the eyes and cause pain and blindness.

The following material is excerpted from the Canadian Federation of Humane Societies Squirrel Factsheet.1 There is also excellent prevention information available in the Humane Society of the United States book “Wild Neighbors, the Humane Approach to Living With Wildlife” , which is sold by WRL.

To prevent entry into the roof, vents should be screened and loose or rotting wood should be replaced. Bathroom, stove and dryer vents should also be covered with screen. Prune overhanging trees, shrubs and vines back to twelve feet to prevent access to the roof or into the attic, although squirrels can climb brick walls. Regular inspections should be done to prevent potential access points from opening up. Eaves and troughs should be cleaned regularly and broken or missing roof shingles should be replaced. Paint or cover exposed wood to prevent rotting and close up any existing openings that opportunistic squirrels may use.

To prevent squirrels chewing your bird feeder and eating the food, install a freestanding feeder on a metal pole at least two metres high, away from overhanging trees and shrubs. Attach a metal cone to the pole to prevent squirrels climbing up. It is difficult to squirrel-proof hanging bird feeders because squirrels can climb down the line, even with a cone, or jump from a nearby tree. You may consider having a squirrel feeder as well as a bird feeder, thereby avoiding the conflict. If you start feeding during the winter, you should continue feeding because animals will depend on you for food.

To protect fruit trees or other young trees from being chewed by squirrels or other rodents, trim low branches and wrap sheet metal around the trunk up to one and a half metres off the ground to account for depth of snow. Squirrels rarely do much damage to seedlings so don’t be too quick to blame them. They may, however, strip bark from trees to access the sweet sap underneath. The trees most vulnerable to this are sycamore, beech and oak.

To save flowering bulbs from being devoured, place one and a half cm (or smaller) wire mesh over the bulb bed. Extend the mesh at least 15 cm beyond the planted area and secure it. This will keep away raccoons and also chipmunks and mice if the mesh is small enough. Remove the mesh when the ground begins to thaw to prevent shoots from becoming deformed as they try to grow through it; most animals will be seeking new shoots, insects and worms at that time so will leave the bulbs alone.

1 “Urban Wildlife – The Squirrel”, published by the Canadian Federation of Humane Societies