The Opossum: Our Marvelous Marsupial, The Social Loner 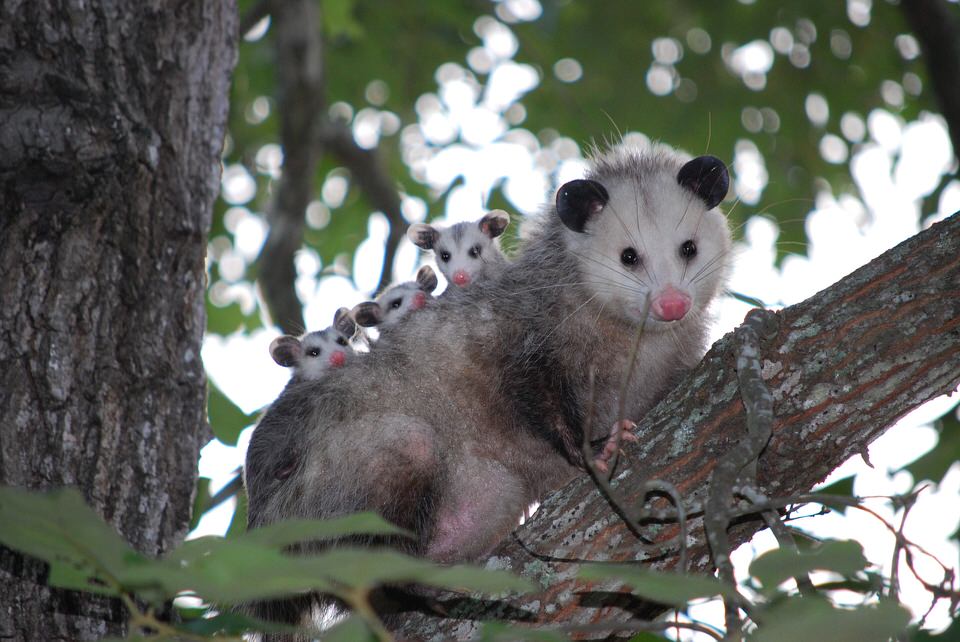 Some time ago, when I first moved into my house and started to remove a huge brush pile in my backyard, I had the fright of my life! There was this scraggly, rat-like animal, with lips drawn back in what it looked like a grin, revealing what appeared to be a huge number of needlesharp teeth. Beady black eyes stared at me, its mouth drooled, and it was hissing at me – it looked like a mini dinosaur. I had encountered my first opossum!

The opossum, Didelphis marsupials, is the only marsupial found in the United States (the young are born prematurely and brought to term in the mother’s marsupium, or pouch, in which she nurtures them until they are weaned.) The opossum has several relatives throughout Central and South America, but Australia has the largest number and the greatest variety of these ancient mammals, such as the koala, wallaby, wombat, kangaroo, and sugar glider.

The North American opossum is also unique in that it is the only mammal in the United States with a prehensile tail, which can be used for grasping like a hand. Young opossums sometimes hang by their tails, but when they grow up, they become too heavy for hanging.The opossum is the only mammal that has four fingers and an opposable thumb on each of its hind feet that works like a human thumb. All nails are nonretractable, except for the thumb. This makes it possible for the opossum to pick up things or hang onto thin branches much better that most other mammals.

The opossum is a cat-sized mammal that resembles a silver rat, with its naked ears, long scaly tail, and silver-tipped fur. The face of the opossum is almost pure white, with four rows of whiskers, a pink nose, and eyes like black shoe buttons. The average adult is 24 to 26 inches long, including the tail, and usually weighs between 6 to 12 pounds. The opossum is a passive animal, but looks ferocious when it displays all 50 teeth, drools, and hisses.

Opossums are nocturnal animals, but they are often seen during the day when their natural habitat has been destroyed, when they are searching for food, or when young and inexperienced youngsters – not yet street-wise – are looking for food.

Ideal opossum habitat is woodland, farmland, and suburban neighborhoods with water nearby. But the opossum is very adaptable and will thrive in nearly any habitat, from wilderness to inner city. It is a common visitor to backyards that provide the basic necessities, such as a source of water, food, and appropriate den sites. The opossum is not particular, and will live almost anywhere.

Opossums are often transient, using whatever den is most convenient within their somewhat loose home range, rather than returning to a particular den each day. Females with young tend to be the exception, using the same den sites for weeks at a time. Opossums often use the abandoned burrows of other animals rather than digging their own. Other potential den sites include woodpiles, rocky crevices, culverts, barns, drainpipes, thickets, and in urban neighborhoods under porches, buildings, and storage sheds.

The opossum is omnivorous, feeding upon almost anything that it can find or catch: rats, mice, moles, slugs, snails, shrews, worms, beetles, ants, grasshoppers, crickets, frogs, garbage, fruit (especially persimmons), corns, berries, and even road kill. That habit gets about 8.3 million opossums killed a year. An opossum seeing an object on a road during the night may believe it to be road kill, and may either freeze in the headlight of a car, or try to run away. As opossums run very slowly, they often get killed. Opossums also enjoy eating snakes, and will kill and eat all snakes including poisonous ones. They are immune to the snake venom, and relish copperhead, water moccasins, rattlesnakes, and others.

Opossums are solitary animals, except when females are with their young, or for brief interludes during breeding season. Only male opossums are territorial, and they will fight violently during mating season. In Virginia most opossums produce only one litter a year, but in some southern states, two litters are common, while a third litter a year has been observed. The age of maturity for males is 8 months, and for females 6 months.

The opossum’s breeding season begins at the end of winter – in this area January and February. While foraging during the night, the male opossum smells a female in heat. Female opossums will accept a male only once during the estrus period. However, if a pregnancy does not result during the 36 hours or so that she is in heat, she will continue to come into estrus in 28 day cycles until breeding is successful.

The opossum gives birth to 16-20 (often more) babies, only 12-13 days after mating – the shortest gestation period of any North American mammal. Newborn opossums are about the size of a grain of rice. They cannot see, but will scramble from their birthplace under their mother’s tail, and wriggle across her hairy belly to the safety of her pouch. Most do not survive the journey, as the youngsters must find a nipple, and there are only 13 nipples. Neonates who do not locate a nipple will perish – each infant opossum must attach itself to one of her nipples.

After just 1 week of suckling, the babies triple their size. In 1 week the birth weight increases ten times. After about 60 to 70 days in the pouch, the youngsters’ eyes finally open, they have some control of their body temperatures, and they have grown to the size of a white-footed mouse, weighing about an ounce. At this time they occasionally release their hold on the nipple. Soon they will venture out of the pouch. When they reach 75 to 85 days of age, they are weaned and seldom go back in the pouch. They will stay with their mother until they are about 3 to 4 months old.

Perhaps the most intriguing characteristic is the opossum’s ability to play dead. When confronted by danger, it can either make a run for it, climb a nearby tree, stay and fight (which it rarely does), or feign death. In this case the opossum sinks to the ground while its eyes glaze over, bares its teeth, and lolls its tongue to the side, successfully simulating death. No amount of prodding, poking, or shaking will revive the animal from its catatonic state. Apparently the animal is incapable of any feeling, and does not flinch.

Opossums create such a convincing portrayal of death, including a putrid odor, that dogs and other predators will abandon them for livelier prey, as most predators will not eat carrion. Some time later, the survivor regains consciousness and continues slowly on its way. Enemies of the opossum are dogs, coyotes, bobcats, and raptors. The two enemies from which the deathlike trance will not save the opossum from are man and the automobile.

Opossums do not harbor diseases normally found in dogs and cats, such as distemper, parvovirus, or feline hepatitis. All warm-blooded mammals can contract rabies, but opossums are rarely found to be rabid. Scientists believe that a body temperature too low to support the rabies virus is the reason. According to Dr. Susan Jenkins, Assistant State Epidemiologist, Office of Epidemiology, Virginia Department of Health, six rabid opossum cases were reported between 1989 and 1998.

How to Coexist with Our Marvelous Marsupial Often mother opossums waddle along with little furry babies attached to them. Sometimes babies fall off, and these “orphans” are brought to wildlife rehabilitators. Frequently sightings involve opossums along the roads that have been hit by cars. Concerned citizens are urged to check the dead opossum. If female, there may still be living babies inside the pouch. Many baby opossums have been saved by those attentive citizens who have transported the dead mother – with her living babies still attached – to the nearest wildlife rehabilitator.

Opossums rarely cause problems for humans, but often frighten people by their rat-like appearance. Opossums are excellent at rodent and insect control, and being carrion eaters, they help keep roadways and neighborhoods clean. Opossums are more beneficial as scavengers, than harmful for any damage they may cause. A neighborhood with opossums tends to be considerably cleaner than a neighborhood without them.

What Do You Do If You Encounter An Opossum?

Nothing! Just watch and enjoy one of nature’s most beneficial and unusual wild neighbors.