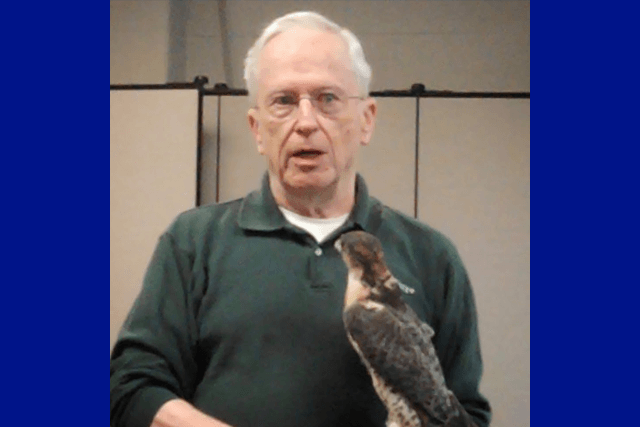 On February 6th, we lost Kent Knowles, our area raptor rehabilitator and founder of the Raptor Conservancy of Virginia (RCV).

Kent, a native New Yorker, was a Navy veteran and attended Harvard Law School. In the mid 1960s, Kent and his family moved to the DC area where he began a 25 year career with the United States Government. After he retired, his passion for nature and birds resulted in his second career as a rehabilitator. He founded RCV in 1998. Kent and his volunteers rehabilitated and released countess raptors over the years. He also delighted WRL members and other Virginia adults and children with his excellent educational presentations. While giving us a close look at these magnificent birds, he made sure it was understood why the birds were now his assistants instead of living in the wild.

Many may remember, RCV’s involvement in the rescue of a Cooper’s hawk trapped in the Library of Congress, and a bald eagle rescued from the Metro tracks. RCV’s contributions live on in other leading wildlife organizations across the US, and will support raptor rehabilitation and public education for decades to come.

Our hearts go out to his wife, Carol, his sons, Brian and Kevin, his grandchildren and to his loyal volunteers.

To the animals he saved,

Traces of him will forever reside in-flight with these striking and solemn birds we see in trees and in the skies around us.

~Kevin Knowles, Eulogy to his father