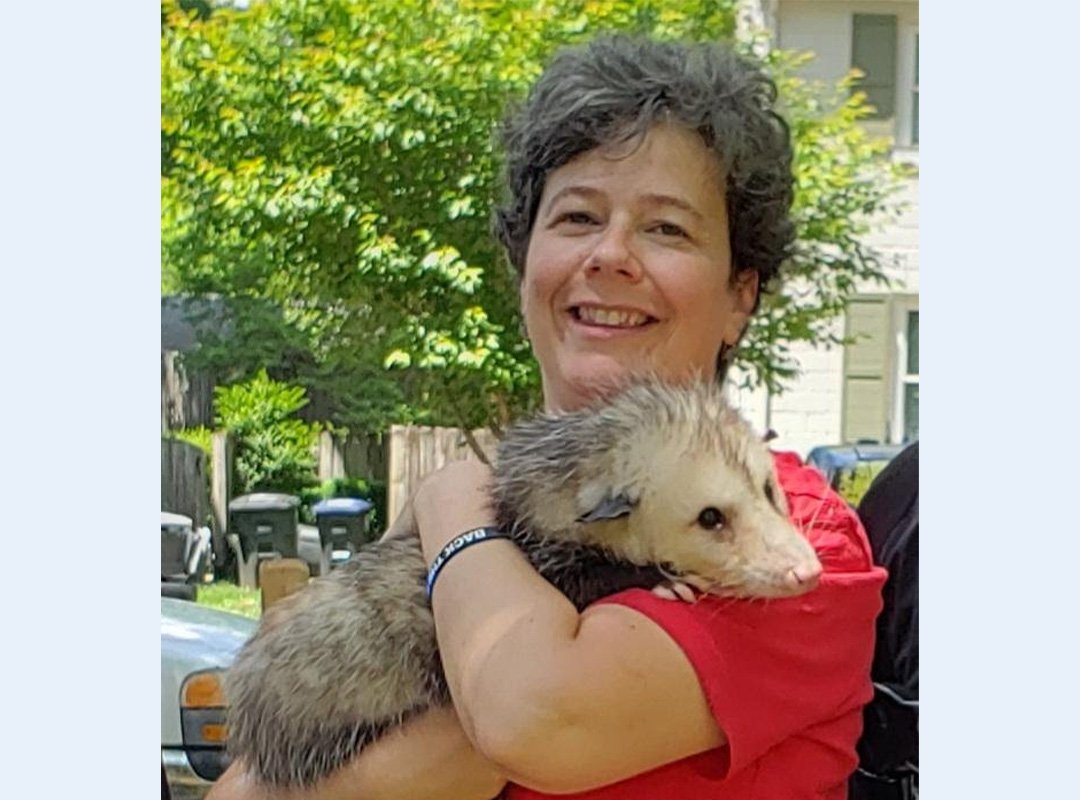 Virginia relies on a volunteer corps of licensed Department of Wildlife Resources (VDWR) rehabilitators, apprentices, and care providers. This group of several hundred wildlife “rehabbers” take in, care for and release wildlife throughout the state. In Northern Virginia and surrounding counties, WRL works with about 28-32 rehabilitators and 18 – 20 apprentices annually. Over a series of Nutley News articles, we will introduce you to many of those who work directly with WRL as advisors on our helpline or as care providers for wildlife.

Karen Brace lives in Fredericksburg, VA. She lives on 12 acres at the end of a gravel road where she releases many of the squirrels, bunnies, and opossums she rehabilitates. Karen first became interested in wildlife over ten years ago when her neighbor’s daughter found two baby squirrels and came to her for advice. She became an apprentice under the late Jeanette Wright and focused on squirrel rehabilitation. In 2012, when a member of the public brought her a box of 11 little opossum joeys, she fell in love and life hasn’t been the same since. Judie Graham, also one of our local opossum rehabilitators living in Culpeper, got her started with opossum rehabilitation.

In April 2019, Karen started Awesome ‘Possumz when it was determined that Stuart, one of ​her rehab animals, could not be released back into the wild. The mission of her organization is to educate the public about the awesomeness of Virginia opossums, the only native marsupial in the U.S and Canada. She and her trusty opossum “ambassadors” travel within a 60-mile radius of Fredericksburg, VA to teach the public about opossums. She also still rehabs squirrels and bunnies. Her apprentice, Danielle, helps her with the abandoned small animals that are brought to Karen from the adjacent counties.

When asked what single animal she would love to rehabilitate, she immediately said wombats! Why wombats? In her words, “they are also marsupials and are essentially big fat roly poly hamsters”. I knew how to spell “wombat”, but had no clue what they were. I, of course, immediately Googled wombats after hanging up and Karen is right, they are adorable! Did you know a group of wombats is called a mob?

Karen’s advice for anyone interested in becoming an apprentice then rehabilitator is: “Focus on one animal first and READ, READ, READ! Learn all you can about that animal and how to care for it. You can learn about other animals down the road.”

Funny story: Sometimes the critter you get from the public, isn’t the one you expected. Someone brought me a “baby squirrel” last year. They arrived and I met them in my driveway. When they handed me the well-taped box I immediately reached inside and pulled out a …. ? At first, I had no idea what this sweet potato sized creature was, with its squished in little face and closed eyes. As I looked the critter over, apparently, I said out loud, “What the heck is this?” The person who brought it to me confidently said, “It’s a baby squirrel!” I said, “Ah, no it isn’t.” The mystery continued until the screaming started and then I knew. Oh yes, this is a baby raccoon, too young to wear its mask yet. Thank goodness for cell phones and our ability to have the callers send us pictures now!

Written by by Janet Schultz