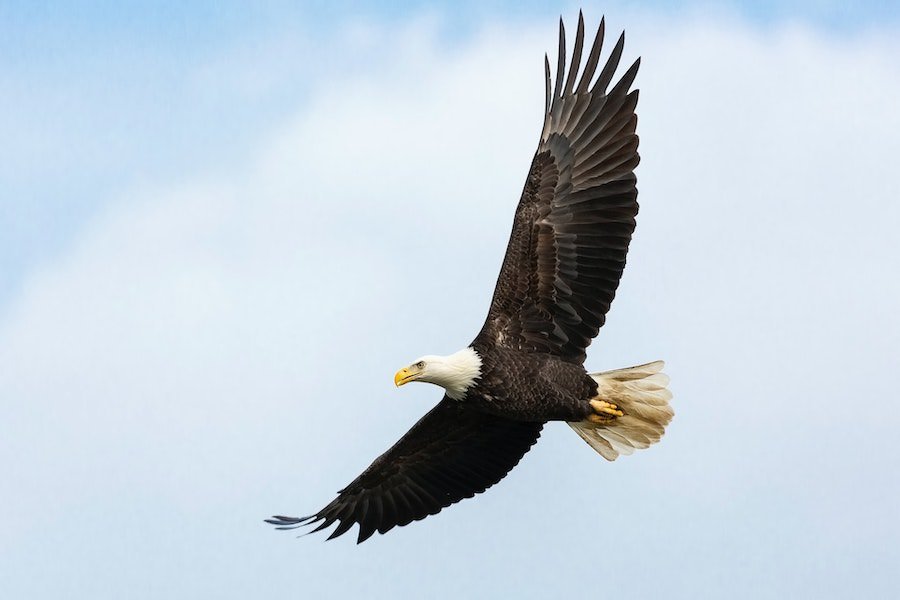 Bald eagles are known for their majestic beauty. Wings spread from tip to tip, soaring against a clear blue sky. They are the symbol of freedom and America’s national bird.

Once nearly driven to the brink of extinction by the effects of the harmful pesticide DDT, bald eagle populations have since made a successful comeback, enabling them to even be removed from the Endangered Species List in 2007.

With an average lifespan of 20-30 years, bald eagles can be seen hunting and nesting along the lakes, rivers, and coastlines of North America. In addition to their keen eyesight and the ability to lock talons with one another in mid-air during territorial battles and courtship displays, they are also known to mate for life.

According to an ABC7 news report, in December 2019, Eric Freitag discovered a sick bald eagle while hunting in Stafford County, Virginia. After arriving at the Blue Ridge Wildlife Center in Boyce, Virginia, the critically ill bird had only a 10% chance of survival, as determined by veterinarian Dr. Jennifer Riley, due to dangerously high levels of lead toxicity in the blood system.

The American Eagle Foundation based in Tennessee states, “Lead poisoning can occur from the ingestion of lead slug or bullet fragments found in the systems and carcasses of deceased and live prey.”

Since a bald eagle’s diet mainly consists of fish, waterfowl, small mammals, and carrion (the decomposing remains of deceased animals), an eagle can inadvertently consume lead when scavenging off the carcasses of hunted animals, such as deer, that may be harboring lead bullets or by eating fish that may have ingested lead sinkers often used by fishermen.

Lead poisoning can be difficult to treat due to the extensive neurological and organ damage it can cause and the inability to remove the large number of bullet fragments from an eagle’s intestines. The American Eagle Foundation states, “When ingested in large enough quantities, lead has detrimental effects on the nervous and reproductive systems of mammals and birds. Eagles with lead poisoning may exhibit loss of balance, gasping, tremors and impaired ability to fly. Emaciation and death can occur within 2 to 3 weeks after lead ingestion.”

Lead poisoning is preventable, yet it continues to affect millions of birds and other species of wildlife on an annual basis. According to the Humane Society of the United States, “An estimated 20 million animals, including more than 130 differing species throughout the food chain, die each year from lead poisoning.”

After finding the lead-poisoned eagle in Stafford County, who later passed away, Eric Freitag started a Facebook page promoting ethical lead-free hunting and fishing. In the ABC7 news report Tim Barber states, “Freitag is urging other hunters to switch from lead rounds to copper rounds or other alternatives.”

Dr. Jennifer Riley of the Blue Ridge Wildlife Center states in the WTOP article, “We’re always trying to encourage hunters and fisherman to just switch to other products.”

The Blue Ridge Wildlife Center also “implores hunters to use non-lead ammunition or recover and dispose of remains through deep burial or incineration,” according to a NBC4 Washington news report published February 20, 2020. In 2019, California became the first state to ban the use of lead ammunition due to its devastating effects on the critically endangered California Condor. The American Eagle Foundation encourages people nationwide to “petition against lead ammunition [and to] write a letter to your Governor, State Representatives, Secretary of the Interior, and Director of the US Fish and Wildlife Service asking them to follow suit with California and ban the sale and use of lead ammunition and fishing tackle.”

Through education and by raising public awareness, lead poisoning can become a distant threat of the past, enabling bald eagles and other species of wildlife to flourish without the hindrance of unnecessary suffering. While bald eagles are no longer considered endangered, their protection is still needed in order to preserve their long-standing legacy. In doing so, they will have a better chance of remaining a prominent presence throughout the widespread landscapes of North America, as well as an ever-needed inspiration to mankind.

As an anonymous quote states, “When a storm is coming, all other birds seek shelter. The eagle alone avoids the storm by flying above it…”

Brooke Shipe lives in Northern Virginia with her husband and two kittens. She is an aspiring author and is currently working on a young adult fiction novel. She has a passion for wildlife and hopes to contribute to a variety of conservation efforts.